This article was originally published by the Frontier Institute.

Chances are, you turned on a light, grabbed food from your refrigerator, or adjusted the thermostat this morning. You’re probably even reading this on your cell phone or computer. Without electricity, none of this would be possible.

Amid all the debate over renewables, fossil fuels, and how we fuel our electric grid, geothermal energy is often forgotten. With this relatively new but rapidly improving clean energy sector, Montana has the potential to expand energy production by harnessing the heat beneath our feet.

Generating geothermal energy works by harnessing the heat originating at the Earth’s core. Hot water flows upward through hot porous rock, acquiring heat energy along the way and turning into steam as pressure drops near the Earth’s surface. In some areas, this water escapes to the surface in the form of hot springs and geysers—if you’ve ever seen Old Faithful erupt or soaked in one of Montana’s many hot springs you’ve experienced this heat firsthand.

Capturing this energy typically works by placing a production well in a place where the steam is trapped under impermeable caprock and drilling through the rock, allowing steam to travel up the well and power a turbine at the surface to produce electricity. A second well called an injection well, is used to put water back into the system, without which the supply of steam would eventually dry up and lose pressure.

This traditional geothermal technology requires the unique subsurface configuration of hot porous rock topped with impermeable capstone to work, which makes it difficult to scale. Despite Montana’s subsurface geothermal resources, the National Renewable Energy Laboratory has identified only seven sites in Montana with known surface-level hydrothermal sites that have the right subsurface conditions for geothermal energy development using traditional technology. 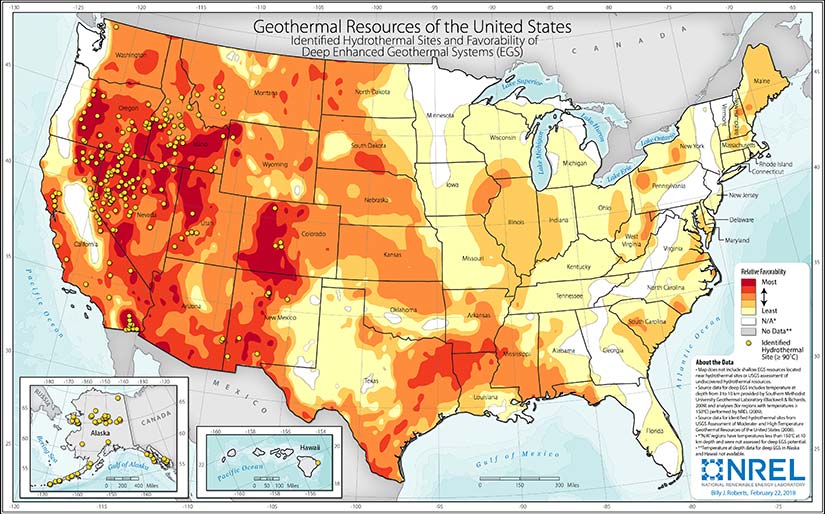 The good news is there are lessons from fracking that can be applied to next-generation geothermal technologies. As Eli Dourado describes in PERC Reports, the emergence of horizontal drilling and hydraulic fracturing have advanced the abilities of energy developers to identify and analyze subsurface conditions as well as drill across rock formations to increase surface area for transferring heat.

Closed-loop geothermal systems, also called advanced geothermal systems, are another new technology. With this approach, a fluid circulates within a closed pipe system from the surface down through the subsurface to absorb heat, back up the pipes to generate power and then repeat the process. With these new technologies that could eventually allow us to drill and capture geothermal energy just about anywhere, Montana is well-positioned to capitalize on geothermal resources and expand our energy sector.

A major challenge that remains for our state, however, is the permitting process to drill wells and produce geothermal energy on federal lands. Approximately 90% of geothermal potential in the United States using today’s technology is on federal Bureau of Land Management lands and will require a lease and permit to develop. Section 390 of the Energy Policy Act of 2005 streamlined the permitting process for oil and gas wells, but that provision does not include geothermal wells. Instead, any geothermal energy exploration or development must go through environmental assessment under the National Environmental Policy Act (NEPA), resulting in an average development timeline of eight years.

Tim Latimer, CEO of geothermal company Fervo Energy, described it saying, “A common experience for me in geothermal is we submit all of the necessary paperwork, regulations, environmental impact assessments to the regulatory bodies, and it sits there for months and months and months, and we actually can’t even get a response.”

The proposed federal Enhancing Geothermal Production on Federal Lands Act from Idaho Sen. Jim Risch and Rep. Russ Fulcher seeks to streamline the discovery and permitting process for geothermal energy projects. If passed, the legislation would bring geothermal to parity with oil and gas exploration on public lands and allow greater opportunities for clean energy development, especially in Montana.

Our energy reliance is not going away. Advances in geothermal energy technology provide Montana the opportunity to enhance our energy sector while powering the nation.